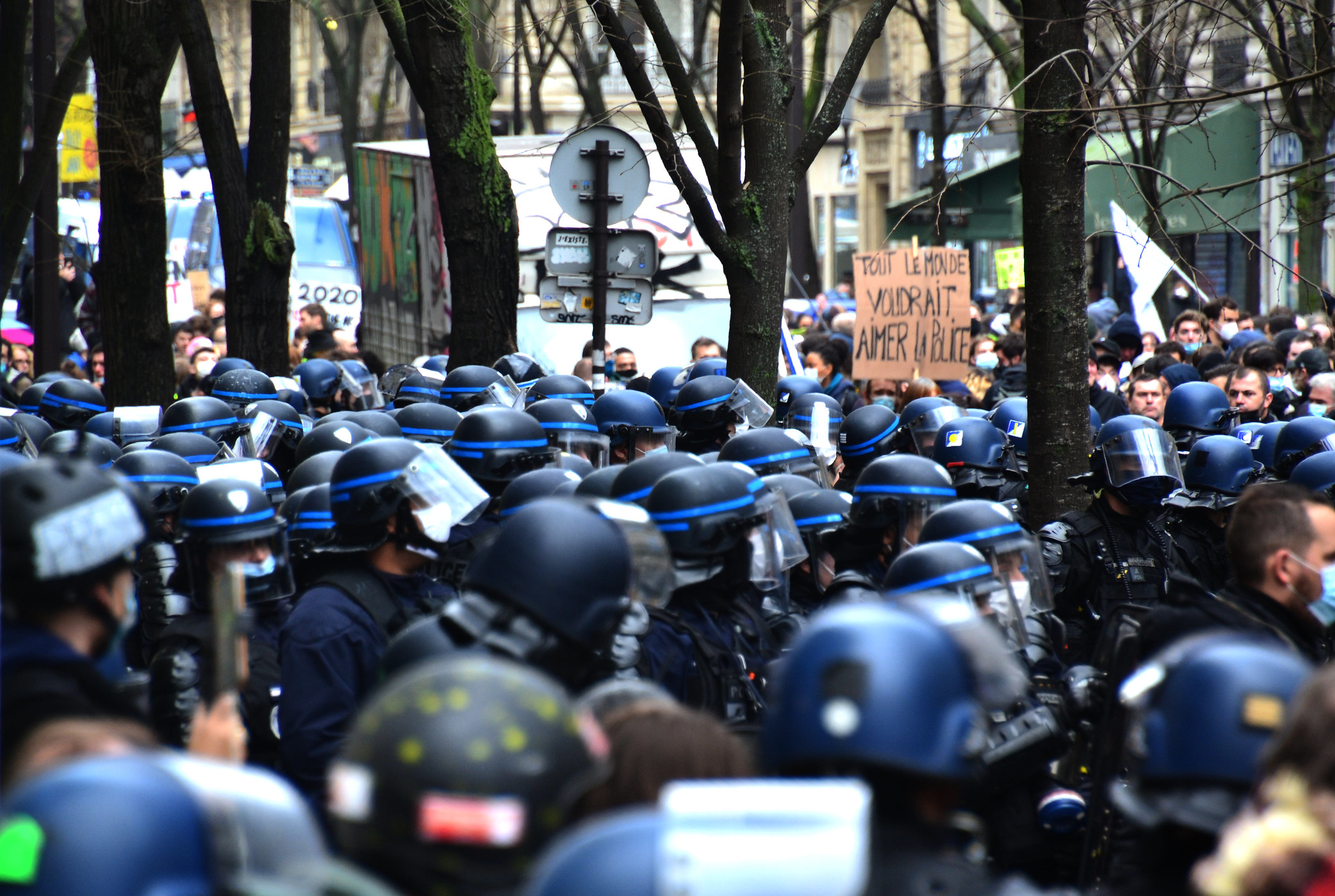 Police at a protest in Paris against France’s global security law. Photo by Jeanne Menjoulet.

In November 2020, French lawmakers from the president’s party proposed a global security law that shocked people beyond its borders. The law included a range of measures legalizing drone surveillance and allowing cops to carry weapons while off-duty, but the section that initially captured headlines was article 24, which, in its original iteration, stated that sharing images or videos of police officers could be punished with up to a year in prison and €45,000 in fines. The rule would severely limit the ability of French citizens and the press to document and publicly circulate instances of police brutality.

Critics pointed to France’s hypocrisy. How could a country that claimed to respect the freedom of the press so flagrantly deny such a right to its citizens? The law’s original text stated that only those sharing images with the aim of harming police officers’ “physical and psychological integrity” would be prosecuted. It also did not ban filming outright, as politicians were quick to point out in order to assure that the law would not prevent journalists from documenting the police. But unions and media workers were unconvinced, pointing to a steady rise in police brutality against journalists during protests in the past years.

As press freedom became a flashpoint in the public outcry, journalists found themselves leading the opposition to the global security law, through editorials, union-led protests, and #StopLoiSecuriteGlobale, the coalition initiated by journalist unions that includes a range of groups working on issues from immigration to climate. To an extent, the popular mobilization against this law is an example of journalistic solidarity with social movements. But the protests’ focus on article 24 and freedom of the press have also led to criticism that this mobilization foregrounds the concerns of (mostly white) journalists — while downplaying police brutality itself, and ignoring the onslaught of racist, Islamophobic politics, of which the law is but one part.

The law passed in the lower chamber of the French legislature at the end of the November, but president Emmanuel Macron’s party responded soon after to near-weekly protests with the announcement that article 24 would be rewritten. The latest version was written largely by the further right Republicans in the Senate where the law is now being discussed. It now does not mention images, but instead targets the “identification” of police officers under the guise of protecting their personal data. According to a senator involved in this rewriting, the language (which critics have described as uselessly vague) aims to target other kinds of information beyond just images—particularly on social media—that could lead to the officers’ identification.

Even before the new version was public, the coalition was dissatisfied with the governmental decision to address only article 24. Pablo Aiquel, an official in the journalists’ union SNJ-CGT and a member of the #StopLoiSecuriteGlobale coalition, told Study Hall before the new version was public that the law does not only threaten journalists, and that the announcement about rewriting article 24 amounts to smoke and mirrors. “The government has understood that the issue of press freedom was a problem, so perhaps, at most, they’re going to find a way to rewrite article 24 to remove journalists from the protests [against the global security law] altogether,” he said. He was right: in unveiling the new version of the article, politicians emphasized that the language would no longer potentially affect press freedom.

The global security law is not the only bill aimed at strengthening policing and security that Macron’s party is trying to pass. Sihame Assbague, an anti-racist organizer and journalist, pointed out that many protesting the global security law have not made significant links to a proposed law on separatism, which is also up for debate in the senate now. The proposed law, which aims to tackle “Islamist separatism” through Patriot Act-like provisions, is a thinly-veiled Islamophobic cudgel that targets a grab bag of issues including polygamy, homeschooling, and online hate speech. “The mobilization against the law on separatism does not exist, or it exists on the margins,” said Assbague. “And for a very, very simple reason: It’s Muslims who are targeted.”

#StopLoiSecuriteGlobale has called for the removal of one part of the separatism law, which they see as a recycled version of article 24 (and is similar to the newly rewritten version of the article), but has not addressed the entire bill on its website. Some journalists have expressed reservations, albeit for different reasons. The proposed separatism law includes a modification to the penal code that would exclude non-journalists from the protections of the country’s landmark 1881 law of freedom of the press and expression, making it easier to bring individuals to trial for hate speech. Today, online speech is regulated under this law, leaving a few months before a trial; with this change, anyone who isn’t a journalist and posts something judged to be hate speech could be tried immediately.

The justice minister has assured that his modifications won’t touch the 1881 law, and that journalists won’t be affected. But he also stated that the 1881 law currently protects some who “do not deserve” it. Emmanuel Poupard, an officer in the journalist union SNJ (also a part of #StopLoiSecuriteGlobale), says that the law creates a worrying distinction between citizens and journalists. “We are also citizens, and that seems dangerous to us,” he said. “Later, this could become a problem with regards to the legal definition of a journalist in France.”

The French government already distinguishes professional journalists from civilians to control cop-watching. In 2019, partly in response to police violence at gilets jaunes protests that was widely publicized through social media, the Interior Minister released a set of non-binding directives for police to follow during protests: journalists could wear protective equipment, but only if they had presented official accreditation to the police beforehand. In other words, only those with a press pass or similar credentials would be able to take protective measures. When one reporter publicized that police had threatened him with arrest while he was covering a protest, the Interior Minister stated that he should have approached the police department beforehand to notify them that he would be covering the protest.

A feature of both laws is an implicit distinction between “real” reporters and “militants,” even if this isn’t formally defined. Although the current legal definition of journalism is broad, the bills allow authorities to judge whether a social media post has the “intention of harming” a police officer’s integrity, or whether a reporter’s online presence is too opinionated for them to be a legitimate journalist. In November, on Twitter, the Interior Minister and another politician accused journalist Taha Bouhafs (then employed at a news website) of being a “militant” with “nothing to do with the values of liberty and democracy” in response to his tweet against the global security law and police violence. In a separate incident, after police detained Bouhafs during a protest, an entire news cycle was dedicated to the question of whether Bouhafs was an activist or a journalist.

Bouhafs is of Algerian descent, and politicians’ calls for journalistic objectivity and credentialism resonate within the broader white French fetish of color-blindness and objectivity. This vague professional expectation of “objectivity” in covering racism is not dissimilar in the US, where some newsrooms discouraged journalists from participating in protests for Black lives last summer. French journalists enjoy stronger unions and work protections that allow them to more easily go on strike and take certain political positions, but those who are also or tangentially engaged in organizing against racism and police brutality face accusations of bias from politicians and the mainstream press. Not incidentally, these tend to be younger journalists of color who have found significant followings on social media or on less traditional, online-only outlets focused on covering social movements.

There have been reports of police violence against journalists covering the protests, which some in the press have described as symptomatic of increasing police violence, which has gained significant attention since the gilets jaunes protests that began in 2018. But anti-racist organizers have pointed out that police brutality predates the gilets jaunes, and has long been present in the majority non-white quartiers populaires. Some are also uneasy with the way that journalists, both through protests and their coverage, have focused their objections to the law on press freedom without directly denouncing racist and violent policing, and without linking the global security law to its larger context of intensifying Islamophobia in France.

“In France, we have journalists who fought for the right to film police brutality, without being capable of politically denouncing police brutality itself for what it is: the normal functioning of an institution charged with the protection of social and racial order,” said Assbague. Assbague, who reports on racism and police brutality, has long been skeptical of the way that the mainstream media reports on these issues by relaying dubious official police narratives. She pointed out that many journalists against the global security law do not take an explicit stance on policing itself, despite wanting to continue to capture its violence.

The voyeuristic tendency Assbague describes has been the object of media criticism before. In 2020, a journalist released a book detailing the two years he spent working as a police officer, with the goal of writing an insider account of the profession. In one scene, he described watching colleagues beat up a 16-year-old. He did not intervene, and later participated in a cover-up of the incident. “Covering this misconduct might allow me to denounce thousands later,” he later said, which did not assuage those who questioned the ethics and purpose of his project.

Members of #StopLoiSecuriteGlobale, however, have described the coalition as unprecedentedly broad, working beyond the interests of journalists alone. “This coordination isn’t the first time we’re working beyond the field of journalism, but it’s perhaps the first time we’ve managed to mix media professionals as well as organizations like [climate organizations] Attac’, Alternatiba, but also families of victims of police violence,” noted Aiquel. The protests featured figures like Assa Traoré, the organizer who led protests against police brutality last summer in the name of her brother, Adama, who died in police custody. In a speech, she emphasized the need to end police brutality itself, and without being solely focused on the right to film it.

Despite the implications for press freedom, the gravity of France’s political moment resonates far beyond the journalistic profession. If the push to strengthen policing — through both the global security law and the law on separatism — is successful, the consequences will undoubtedly reach Black and brown people first, with those denouncing them through social media risking accusations of a bias incompatible with professional journalism.