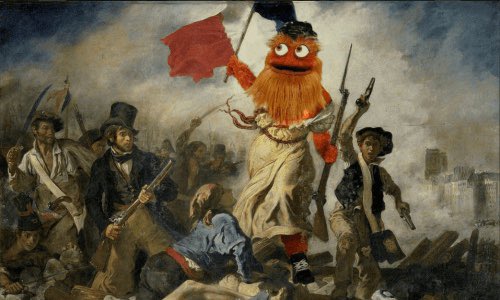 It was day four of waiting for results after the US election, and Le Monde reader Babette had a pressing question for the French newspaper’s Live team: “C’est quoi Gritty?” Images of the menacing hockey monster had been popping up in coverage around the world as journalists flocked to Philadelphia to cover protesters in the swing state; the joyous, days-long affair was punctuated by dancing and colorful characters, so of course, Gritty was everywhere. Fortunately, Le Monde had it covered. In 2018, when the Philadelphia Flyers mascot was first revealed, reporter Marc-Olivier Bherer had written an article for the paper’s opinion section describing the phenomenal Philadelphia Flyers mascot, an empty-eyed chaos goblin that landed like a prophetic, soda-orange meteor into the nihilistic Philadelphia autumn of 2018.

“In Philadelphia (Pennsylvania), a strange creature appeared this fall,” Bherer wrote in French. “The creature is hirsute, its frozen smile mounted above two enormous bulging eyes, its coat is a flaming orange and upon its head rests a black helmet.” Gritty, he wrote, was an appropriate mascot for this city and its “image de loser” that also corresponded to “the state of the American far left” in general. He also surmised that the Flyers’ decision to pick such an unimpressive mascot was likely an attempt to escape “la controverse” like the one surrounding the Washington football team, whose anti-Indigenous name and mascot were only removed this year. Bherer translated “Gritty” as “le teigneux,” a word that can also mean “nasty,” “scrappy,” or “wicked,” styled as a nominalized adjective — as in, “Alexander the Brave.” The standard French dictionary defines “teigneux” as someone who is “aggressive, tenacious in their meanness,” a description that would undoubtedly delight those for whom Gritty is a welcome ally in the merciless antifascist struggle.

Many Americans, as their cultural artefacts like Emily in Paris tell us, view the French as solemn and uppity, so seeing one of their most absurd popular symbols solemnly explained by the French paper of record was a source of immense amusement. This impression of France was mirrored in the enthusiasm of a man who, accosting a giggling, steadily reddening reporter for the news channel BFMTV, proceeded to perform his love for the tight-nosed nation: “I’ve been to France, it’s beautiful! Escargaux! I love croissants! Hon hon hon!”

True to the stereotypes, language in traditional French media does err on the formal side, and Le Monde explainers on US popular culture are a fascinating trip through the looking glass. Consider this 2012 article on memes, then a mostly anglophone phenomenon, which begins by tracing the word back to its Greek origins. Or this explainer on American football (the sport, not the band), published in 2019: “Created in the XIXth century and instituted by elite universities along the East Coast of the United States, football is, like rugby, a sport played mostly by hand, consisting of carrying an oval ball into the opponent’s goal. It owes its name not to [the body part] the foot, as with European football, but to the dimensions of the ball (exactly a foot long).” Such a detailed article explaining a game that is barely played anywhere else demonstrates the hold that US culture has on the rest of the world, a recurring grievance among, well, the rest of the world.

But Gritty’s appearance in Le Monde is noteworthy not only due to American cultural imperialism, but because the mascot’s power derives largely from popular protest and the sheer force of the left-leaning American internet, two things that are typically misrepresented in both national and international media. “Keep your Marxist hands off Gritty,” a writer at the Wall Street Journal implored in 2018, in vain. Lacking in symbols that could adequately explain both the slow-burning doom and rapidly evolving irony of the era, the Philadelphia left had already imprinted on Gritty, meme and manifesto, a monster for our times who contains both the despairing nuttiness of it all and the brutish will to go on. After all, despite Gritty’s triumphal and unsparing spirit, the team he represents is just okay. But he marches on, popping up at anti-Trump rallies, antifascist actions, and protests, a powerhouse with an unmistakable emptiness in his eyes.

Last year, a study on the French media ecosystem found that, even more than in the US, the media agenda tends to be set by a handful of established outlets, including Le Monde, that rarely cite reporting from local or online-only sources. The establishment media tend to focus on capital P-politics, sometimes missing populist movements and unrest in the process — movements that have become a defining feature of Emmanuel Macron’s presidential term. For example, these established French media outlets didn’t cover the nascent gilets jaunes social movement until protesters vandalized the Arc de Triomphe on December 1, 2018, while regional and online-only media had been writing about them since mid-November.

Large outlets in the US, too, have a reputation for ignoring or misunderstanding social movements or local dynamics in their reporting, including their reporting on Philadelphia. In a media landscape dominated by behemoths headquartered in New York and DC, the recognition of a local symbol beyond these cities can be a source of pride and hilarity—especially in an underdog city that, in the words of local cartoonist Alli Katz, loves to talk about how tough it is. It was only a few months before the gilets jaunes began their protests that Gritty emerged as a local symbol and lightning rod for the scrappy leftist politics that Philadelphia has come to harness. On October 25th, City Council passed a resolution officially welcoming Gritty to the city, describing him as “an acid trip of a mascot” and “our hideous monster” who, “like our commitment to justice in the face of adversity, will not be mocked or stopped.”

What began as a bit continued to reappear, in protests and media and merchandise, until last week, reporters at Le Monde were describing Gritty as a “coqueluche du mouvement antifasciste” (“the darling of the left”) in order to explain Philadelphia’s swing-state role to Babette. Gritty’s tenacious meanness — an insolent breath of fresh air next to politicians’ calls for civility in the face of fascism — is a testament to the popular discontents that, like the still-kicking gilets jaunes, cannot just be swatted away by a media anxious to return to covering what the powerful have to say. May the political force of such “mèmes” never be underestimated.