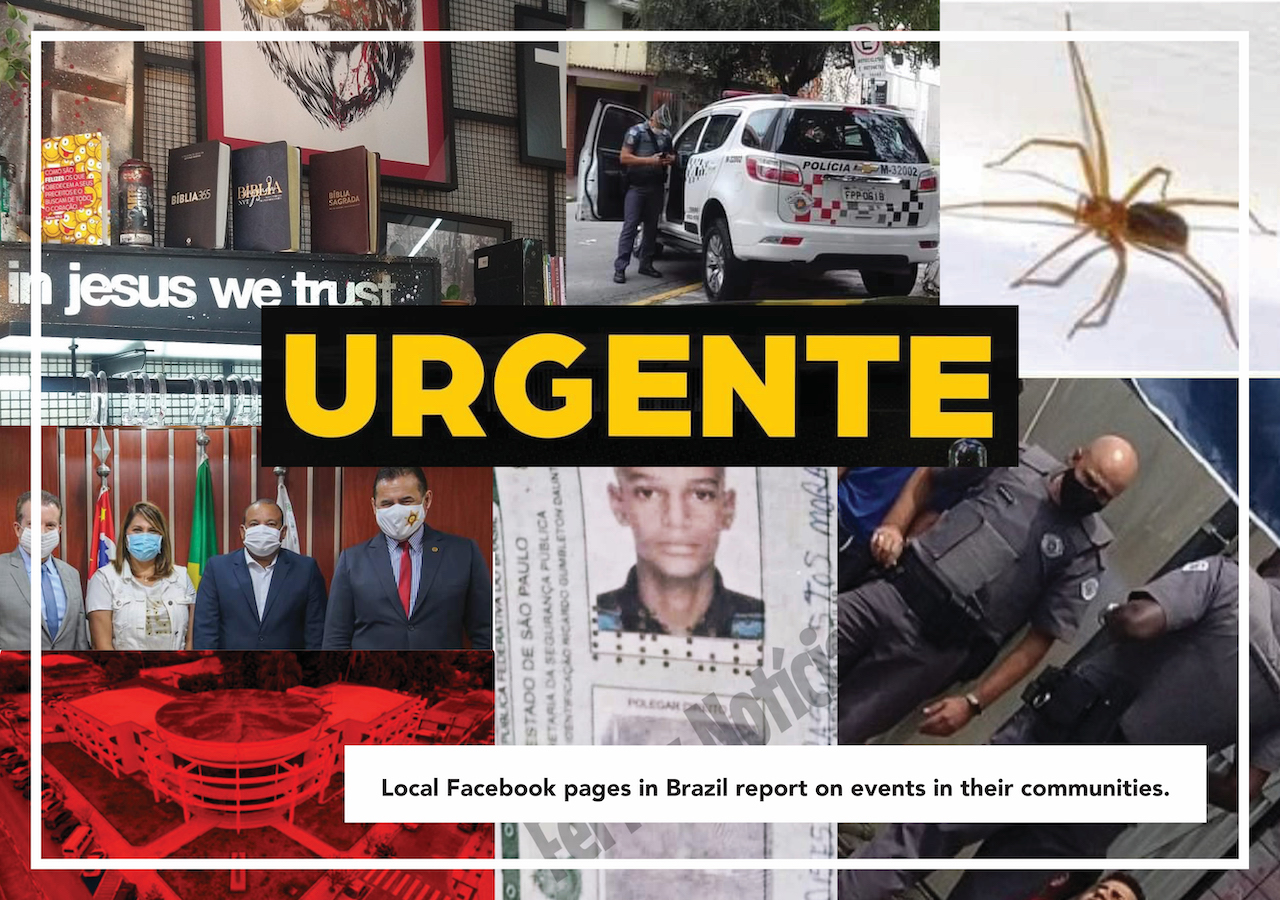 Posts from a Facebook page in Brazil show the range of stories — mostly local crime — that the page posts to its followers.

After an evening shift at the hospital in the southeast Brazilian city of Ferraz de Vasconcelos, Renan Rocha, a nurse, left the bar he’d gone to with friends and disappeared. One day later, the Facebook page Ferraz Notícia reported that Rocha’s body had been found; the post gave condolences to his family. A month after Rocha’s disappearance and death, the same page reported on November 9 that two brothers had a fatal knife fight in one of the city’s neighborhoods, leaving one brother dead. Other posts on the Facebook page that month included reports of bikes being stolen and found, and a list of who to vote for in the upcoming mid-November local elections.

Ferraz Notícia is one of the countless Facebook pages dedicated to reporting news in Brazil, especially in smaller cities, which are underserved by traditional outlets and often do not have a single newspaper.

According to research by Atlas de Notícias, a collaborative initiative for mapping newspapers in Brazil, 62.6 percent of Brazilian cities did not have a single newspaper in 2019. Another 19.2 percent were almost news deserts — communities with limited or no access to locally-sourced news and information. Other cities have newspapers in circulation, but these papers are often linked to powerful families involved with local politics, operating as mouthpieces for their interests and contributing to the scarcity of news and information faced by certain communities, particularly poorer and less politically powerful ones.

In the absence of formal local news outlets, a novel but flawed replacement has emerged: hundreds of Facebook pages and WhatsApp groups, created and run by local citizens.

“In view of the reduction of printed newspapers, due to the cost of printing, the city [of Vargem Grande Paulista] was practically without information. The residents felt abandoned,” said Neo Correia, who founded the page.

Correia, a professional journalist and journalism director of a communications company in Osasco, in greater São Paulo, says he decided that “the best thing would be to open a page that could exploit all the strength of the internet, where we would show news in text, live videos, and videos on demand.” In 2013, he partnered with a cable TV network to create the outlet, which employs a team of four reporters, a cameraman, a proofreader, and a web designer. Despite the outlet’s apparent independence, however, the page shows a marked preference for the mayor of the city, who is constantly portrayed in a positive way and has all his actions followed closely.

Unlike TV Vargem Grande Paulista, most of Brazil’s local news Facebook pages are founded and run by one person, usually someone with no background in journalism but who is critical of traditional coverage (or the absence of it) and wants to show what really happens in their city. These pages focus heavily on security — denouncing urban violence, neglect from the authorities, monitoring police work. When the pages begin to spread and gain followers, readers also start to send information. Fact-checking is rarely done; if it’s done at all, the process is lacking in rigor.

Of the roughly half a dozen page owners or webmasters I spoke to, only TVGP had a professional reporter involved in news production, covering cultural and sports events as well as local politics. The majority of pages operate somewhere in the middle, relying mostly on information from outside sources and functioning as gatekeepers of information sent by the local community and authorities.

In most cases, the founders themselves finance the pages, sometimes receiving some sponsorship from a small local business. It is difficult to have a real idea of how much these pages make, or even if the sponsorships end up influencing the editorial line. Few have TV Vargem Grande Paulista’s polish; with only one person parsing tips from the public, passing on information from City Hall, and ensuring to publish regularly, the pages are often lacking in design and news judgment.

Geraldo Mendes runs Ferraz Notícia, from Ferraz de Vasconcelos, a city with almost 200,000 inhabitants served by two newspapers in the São Paulo region. He admits that he does not always fact-check the information he receives from citizens. In general, he says, city residents pass information to the page based on what they see on the streets.

Like Correia, Mendes’ motivation is to bring the news to the city’s population, but he also says “there are printed newspapers in the city, which direct [their] articles very much to the political side of things and therefore [do] not bring information of real interest to everyone.” Correia’s page is filled with local bulletins on road closures, information about missing dogs, and other mundane issues that don’t normally end up on the pages of traditional newspapers.

Mendes explains that newspapers tend to focus on the activity of politicians and on events that are more relevant to the upper classes, leaving themes that are, he says, more important to the general population aside.

Nina Weingrill, journalist and co-founder of news agency É Nóis [It’s Us], agrees: she tells me that often newspapers in small towns “are held hostage to power structures that do not make journalism, do not represent the interests of civil society, [and exist] to keep groups in power.”

Bruno Cesar runs Itapevi Realidade in Itapevi, a city with 220,000 thousand inhabitants in the São Paulo region. His page has over 37,000 followers. Even though Itapevi has three newspapers circulating, Cesar decided to create the Facebook page “to show the reality lived by the people [of the] city.”

“Although the city has had some newspapers printed for many years, most of them, because they are sponsored by political groups, started to deviate from the social function of journalism,” Cesar said. “This made it impossible for the population to understand what’s going on. Political interest was ahead of our citizens’ needs.”

During the pandemic, Cesar has been publishing information on how to get care for COVID-19 and tracking the number of infected in the city. He says his page had over 2 million views in the first seven months of 2019, which he describes as “an extraordinary number for a website in a city like ours.”

Adão Santos, the founder of Arujá em Alerta, has also seen his page grow. Santos worked in public and private security for 20 years and noticed that many residents of Brazil were scared by crime in their local communities. He decided to create Arujá em Alerta in 2016 as a way to report cases of violence in the city. In a post from October, the page denounced the robbery of a pharmacy; days later, another post celebrated the arrest of an individual accused of being the robber.

Santos’ page is typical in its focus on security. Violence is a serious problem in Brazil, and Facebook news pages meet a demand for more coverage of local crime. However, these pages often uncritically reproduce information they receive from the police or even passers-by, deepening the stigma attached to certain neighborhoods, and often stoking fear based on race and class lines. Ferraz Notícia, for instance, recently requested its followers help identify an alleged robber caught on a security camera, prompting followers to advocate for a violent response. Arujá em Alerta is noted for reproducing reports of crimes, robberies, and assaults, often exposing the identities of alleged perpetrators, which sometimes results in followers of the page advocating that robbers be killed by the police.

The perspective of victims of police brutality is often missing from the pages. This coverage also contributes to the so-called war on drugs, which leads to the incarceration of a disproportionate amount of black and poor people.

Santos notes that he works with a staff of five people at Arujá em Alerta, and that “all the denunciations are rigorously investigated” by his team. He adds that, although the page focuses on crime, they also make sure to condemn cases of police brutality or racism.

According to Stephen Jefferson, CEO of local news platform Bloom Labs, this type of citizen journalism can spread information from fake news sources, “which not only negatively inform us but also lead us to make decisions that may be based on bad information.”

Sérgio Lüdtke, journalist and editor-in-chief of the Comprova project, an initiative that aims at tackling fake news, agrees. “With the reach of social media…local information circulates, but is not produced or mediated by journalism,” he explains. “The potential for the spread of misinformation has grown greatly.”

It’s nearly impossible for many local papers to survive in the internet age, explains professor Jeremy Caplan, Director of Teaching and Learning at CUNY’s Newmark Graduate School of Journalism. Yet local media’s role remains important. Marina Atoji, executive manager of ABRAJI, or the Brazilian Association of Investigative Journalism, points out that most of these pages are made by members of the community who have their own jobs, but who “maintain a means of communication to share content that they considers relevant to…the community in which they live — often motivated precisely by the feeling of lack of local information.”

The pages fill a gap left by the collapse of the news industry, and though they don’t uphold rigorous journalistic standards, it’s hard to blame the pages themselves for their lack of resources. Although it is difficult to balance providing local reporting against falling into vigilantism, their problems are not unique — Brazil’s traditional newspapers are often biased and slant information for political ends too, and fake news is a problem that reaches far beyond Facebook pages.

One thing to have in mind, Lüdtke reminds me, is that hyper-partisan social media pages are also prevalent in other countries, including the US. He says news consumers in both countries could benefit from fact-checking initiatives and media literacy education.

As for Renan Rocha, the nurse who disappeared and was found dead after a night out with friends, Ferraz Notícias has no more news. They moved on.