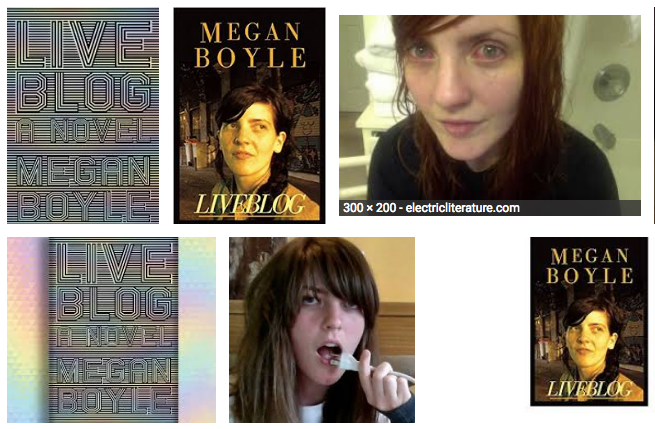 “Isn’t it funny, there are some things that are kind of dated now? Time is moving so fast,” Megan Boyle, the 32-year-old Baltimore-born former alt-lit icon breathes into the phone. She’s talking about herself, but she doesn’t sound super upset about it. In fact, her new 712-page novel, Liveblog, is also dated, since it was borne from and is concerned solely with a period of time that is decidedly over.

Boyle, best known for her Vice column, a poetry collection called selected unpublished blog posts of a mexican panda express employee, and Thought Catalog contributions like “Lies I Have Told” and “Everyone I’ve Had Sex With,” hasn’t written anything on the internet in years. She says she doesn’t even really care about the alt-lit label that plastered writers like Tao Lin, Mira Gonzalez, Steve Roggenbuck, and the whole “40 likely to die under 40”crowd during that sliver of peak-Tumblr, where many of them published, from 2011 to 2014.

This micro-era ended sharply, just five years ago, and yet it feels like a lifetime ago. I was a teenager then, so I was literally naive, but this type of literature feels naive too, in that it assumes there is something powerful, important, and transcendent, something that will present itself if you just catalogue the grit and boredom of life diligently and honestly enough to earn it. In fact, wasn’t that part of the Internet’s promise, that if you just collected enough stuff you could catch a glimmer of something true and beautiful?

I ask Boyle if there’s anything she wants people to know before they read the book “I guess that there are boring parts,” she says.

The book is a loosely edited reprint of the liveblog that Boyle wrote on Tumblr for several months in 2013. There are a handful of plot points revolving around a break-up and apartment hunting in the Rockaways, but it’s mostly a seamless stream of consciousness about whatever 2013 seemed to be about — buying a Logic e-cigarette, arguing about Girls, eating Sabra hummus, drinking sugar-free Red Bull, popping Xanax, talking about Twitter, and making plans to see Spring Breakers. It takes place mostly in Boyle’s parents’ homes, and her friendship with her mother is the only constant — the richest note in a book about softcore body horror and general banality. At one point, her mother tells her, “Don’t worry, it’ll all be over soon and you’ll have everything to look forward to.” (Boyle’s response is, “Used a robot voice to say ‘Interesting double meaning.’”)

Liveblog is impressive as an endurance performance, with its 712 pages written largely on iPhone Notes or in long sprints in the middle of the night, and accounting for nearly every minute of Boyle’s life in the months of its duration. Like the monological autofiction being written around the time she was blogging — Knausgaard’s My Struggle or Sheila Heti’s How Should a Person Be? — it twists and turns only inwardly. Tyrant approached Boyle about publishing the print version in the spring of 2014, and it’s taken four years to edit, losing about a third of the original text. “I liked it on the internet, as what it was,” Boyle tells me. “But I don’t know… a book gives it a little more, it’s a different experience of it, that I wanted to experience.” Sure, why not?

In the middle of Liveblog, she writes: “REMEMBER YOU USED TO BUY RECORDS AND BIKE AND DRAW AND READ AND THERE WERE PARTIES AND LONG UNINHIBITED TALKS AND INSIDE JOKES AND COWORKERS AND THEN YOU MADE THE MISTAKE OF WRITING ON THE INTERNET AND USING DRUGS REGULARLY.” The line is a striking self-admonishment that’s also kind of an indictment of her entire genre. If writing about your life online only makes it worse, and in any case anything you write gets forgotten as it drops down the feed, what was the point?

The oddest thing about Liveblog may be the choice to publish it now. Alt-lit was declareddead unanimously in October 2014, the month that accusations of statutory rape and sexual coercion came out against Stephen Tully Dierkes and Tao Lin — two of its most beloved, or at least most powerful, figureheads.

Dierkes and Lin make plenty of appearances in Liveblog, as part of Boyle’s social circle and as her colleagues. Particularly Lin, to whom Boyle was married for about two years. “I’ve thought that people will probably pay attention to that,” Boyle says first, slowly. “I feel nothing but support and talked with both of them when those things were going on, and it just seemed like a hellish experience [for them].”

I ask her how she thinks that frames the book, and the way that people will read it.  “My personal experiences with these guys have never been bad. I don’t know — I don’t know. It’s not a big worry of mine, though I feel like everybody can say whatever complaints they have.”

It’s not really good enough, but I can concede that it would be impossible, or at least dishonest, to try to extract them from such a structurally specific piece of writing.

That would be a different, story, right? Megan Boyle edits them out. It would smack of cowardice and dishonesty. Yet, “but my personal experiences” is never the right answer, and it looks particularly tone-deaf in the context of the last year and especially the past few months, during which famous literary men have been given large sums of money and prestigious platforms from which to put forth hammy, dementedly self-obsessed epics on their experiences, further diminishing the experiences of the women they reportedly assaulted or harassed.

At the same time, alt-lit was never really about doing the right thing; it was about recording exactly the minutiae of your highly biased personal personal experience.

In any case, these boys she defends are pretty irrelevant. Tao Lin is “back” now, with a nonfiction book about drugs I’ve seen at Greenlight Bookstore, but haven’t heard anyone say a word about. Dierkes left public life, supposedly of his own volition, but probably in an attempt to avoid the further accusations that continued to pour out even after he did so. If there is “alt-lit” now, it is probably just Twitter — the weird corners not consumed with political rage, where writers like Darcie Wilder and Melissa Broder made their names. Where else does nihilism meet a woozy obsession with romance and painkillers? Nobody is using Tumblr anymore. I mean, not even the inventor of Tumblr.

Alt-lit was driven by a bunch of bleary-eyed shitposters who refused to say when they were joking. The fundamental question of the genre remains: was it solely narcissism — suburban malaise superficially amplified by corny obsessions like David Lynch, mall culture, Enter the Void, and Adderall — or did it have some deeper significance. The issue it did finally address was, what has being so online done to us? Liveblog might be its ultimate answer.

It would be too easy to call a book like this worthless. But it’s also funny and smart, prescient about the way Twitter has turned into a space where everyone’s performative self-hatred sounds exactly the same. Making a Tumblr into a physical object is a good reminder that the internet’s past — no matter how recent — is editable but not destructible. And there’s nonsense in there that’s almost magic, like Boyle’s entry that reads, in entirety: “passed billboard advertising a ‘lifestyle salad.’ want to eat a ‘Fleetwood Mac rumors tour lifestyle salad.’”

I ask Boyle if she still feels that the internet was a mistake for her, and she takes it all back. She just needed a break, she says. She loves writing on the internet: “I think in general, the internet’s done such cool things for writing and I’m so happy that it exists.”

The internet is completist. Blog posts are titled “I went to every rest stop in New Jersey” and there are supercuts of “every single time Owen Wilson has said ‘wow.’” The internet seeks truth through comprehensiveness. This is not an efficient system, nor does it accurately represent the whole picture. It is simply overload.

Liveblog is likewise an inefficient story, though there are moments when you can let yourself see it as a portrait of a unique mother-daughter relationship, or a pretty okay break-up story, or a circular and darkly comic discussion of an abortion, the only event the real-time blog refers to retroactively.

Or it’s just a sometimes-boring diary written while on drugs. Boyle tells me, “I wanted to encourage people to have an open mind about people from the past still being people.” I don’t necessarily like being reminded that the big personalities of alt-lit are still people, but I have to admit it’s true. Liveblog made me think harder about them and their impact on my life and my writing than I ever would have been inclined to do on an idle afternoon of my own. And I do like having an artifact that reminds me of that time when it felt like the internet really was going to turn everybody into heroes. It certainly doesn’t feel that way now — blogging’s a profession that pays as bad as everything else, which is to say very bad, and anyway, that’s the least of our worries in 2018.

It’s easy to forget there were at least a few years when it seemed like maybe all you had to do was stay up all night, drink a few Red Bulls, make yourself dizzy with blue computer screen light, and you, too, could be important — make something out of nothing, feel firecrackers go off behind your eyes, totally alone.

Get the best of our content sent straight to your inbox.