Last Monday, BuzzFeed published a profile of internet celebrity Trisha Paytas by Scaachi Koul. For those following the saga, the profile was actually the conclusion to a months-long harassment campaign against Koul in which internet drama culture and standard journalistic procedure spectacularly and publicly collided.

In May, Koul interviewed both Paytas and frequent online nemesis Gabbie Hanna for separate profiles. Paytas, however, demanded that any reference to them be removed after learning during the fact-checking process for the Hanna profile that they would be mentioned.

“In reality, journalists don’t have to abide by a public figure’s preferences about what gets brought up in coverage of them,” Kat Tenbarge, who covers online creators for Insider, tells me over email about the situation.

The Gabbie Hanna piece went live, with the reference to Paytas included. So Paytas did what they had been taught to do through years of living online: turn any shred of adversity into content. Their fans, in turn, engaged with it. In her subsequent Paytas profile, Koul details some of the harassment she received as part of Paytas’s public lambasting following the Gabbie Hanna piece, including fans “sending [her] doxing threats, suggestions [she] kill [herself], demands that [she] be fired” and “racist jabs about [her] name and appearance.” 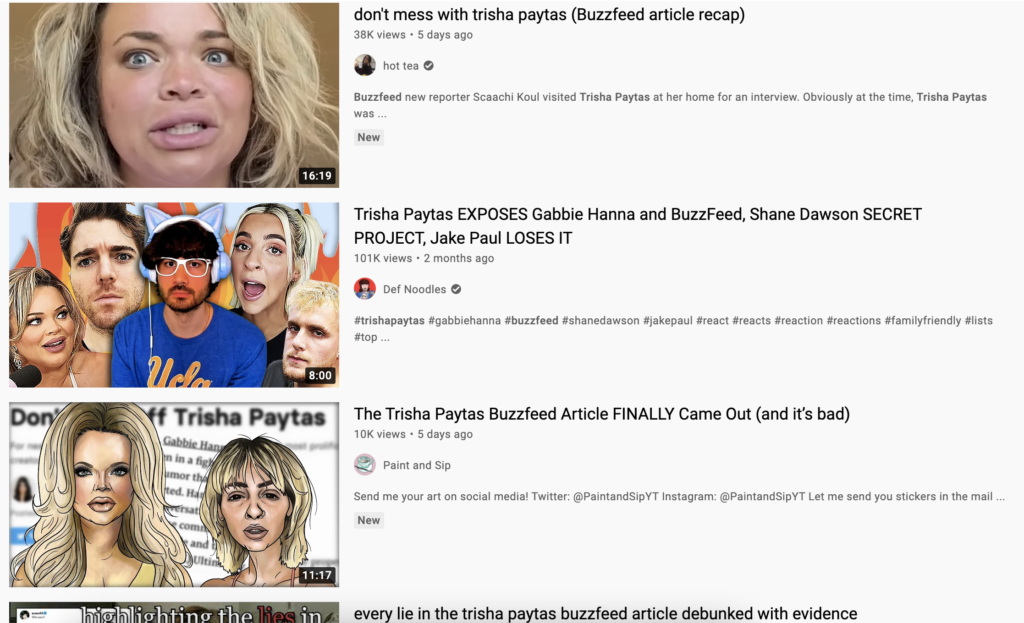 Over email, Koul tells me that influencers can get away with this kind of treatment because they don’t rely on journalists for their success.

“They already have a firm hold over their own narrative, their audience, and how that audience understands that narrative,” she says. “If they’re used to telling their own story on their own terms — even when their version of it might be inaccurate or unfair or unvetted — it seems natural that they’d be hostile to a third party coming in, who can maybe see the facts with more clarity, and who doesn’t have a vested interest in protecting them.”

Koul’s story is unfortunately one of many that have gone down between journalists and fandoms as internet coverage goes more mainstream thanks to the pandemic. Fandoms are self-policing communities, operating under decidedly not-journalistic standards of receipts and accountability.

“A lot of people in the influencer world aren’t ready to be reported on, just like most people who post online probably haven’t had media training or any expectation that their lives are newsworthy,” Tenbarge says. “They aren’t always equipped to deal with a reporter combing through their online posts and asking them personal or sensitive questions.”

“Instead of rising to the level of professionalism journalists typically demand of big stars, influencers try to drag them down to their level,” Kelsey Weekman, internet culture reporter at In The Know, adds over email.

When Rebecca Jennings, senior reporter at Vox, profiled Paytas back in March, she didn’t receive as much targeted harassment, but the discourse was similarly lively.

The tense internet fandom-journalist relationship is just as much a wake-up call for writers as it is influencers. While many outlets are suddenly jumping aboard the internet culture train, Koul’s experience is proof that even the most thorough journalist is subject to a previously unheard of level of public scrutiny, so coverage should not be approached lightly.

“Tiny flaws in reporting — the way relationships are portrayed, how we decode apologies and how we keep track of controversy — can immediately discredit you in the eyes of a seasoned fan,” Weekman says. “The people leading this coverage should understand the nuances of these complicated personalities and get comfortable with fact-checking and hostile subjects.”

It’s a fine line, because as Jennings points out, you can’t cater to the fans, either.

“Stans, and just as importantly, anti-stans, see the world in blacks and whites — there is only hyping someone up or tearing someone down — but a writer’s job for the most part is to view the world in shades of gray,” she says.

The new reality of internet culture reporting only cements the importance of anti-harassment measures taken by both reporters and their organizations.

“Make sure you and your family don’t have personal information readily available online, mute offensive keywords in your mentions and report abuse mercilessly,” Weekman says. “Your work doesn’t end when your piece goes up. Consider the next few days of monitoring fallout to be part of the process.”

“In many situations you are going to feel overpowered and frustrated,” Kat says. “But you can choose how much of your work and life and personality you want to put online.”

“The next step is getting organizations to understand that, too, and protect their entertainment/culture journalists from doxxing or other threats just as seriously as they protect their hard news reporters,” Jennings adds.

While the experience endured by Koul is remarkably frustrating and painful, Weekman credits the journalist for instigating what she hopes will be a turning point in this kind of coverage.

“No one should have to withstand abuse, but I don’t think people knew that the fans of certain internet personalities could be as bad as certain Barbs or Swifties,” she says. “I’m grateful for the way she’s handled it and I hope that ultimately these kinds of profiles will shed light on personalities that are mysterious and incomprehensible to a large number of people and get people to start taking them (and their fans) more seriously.”