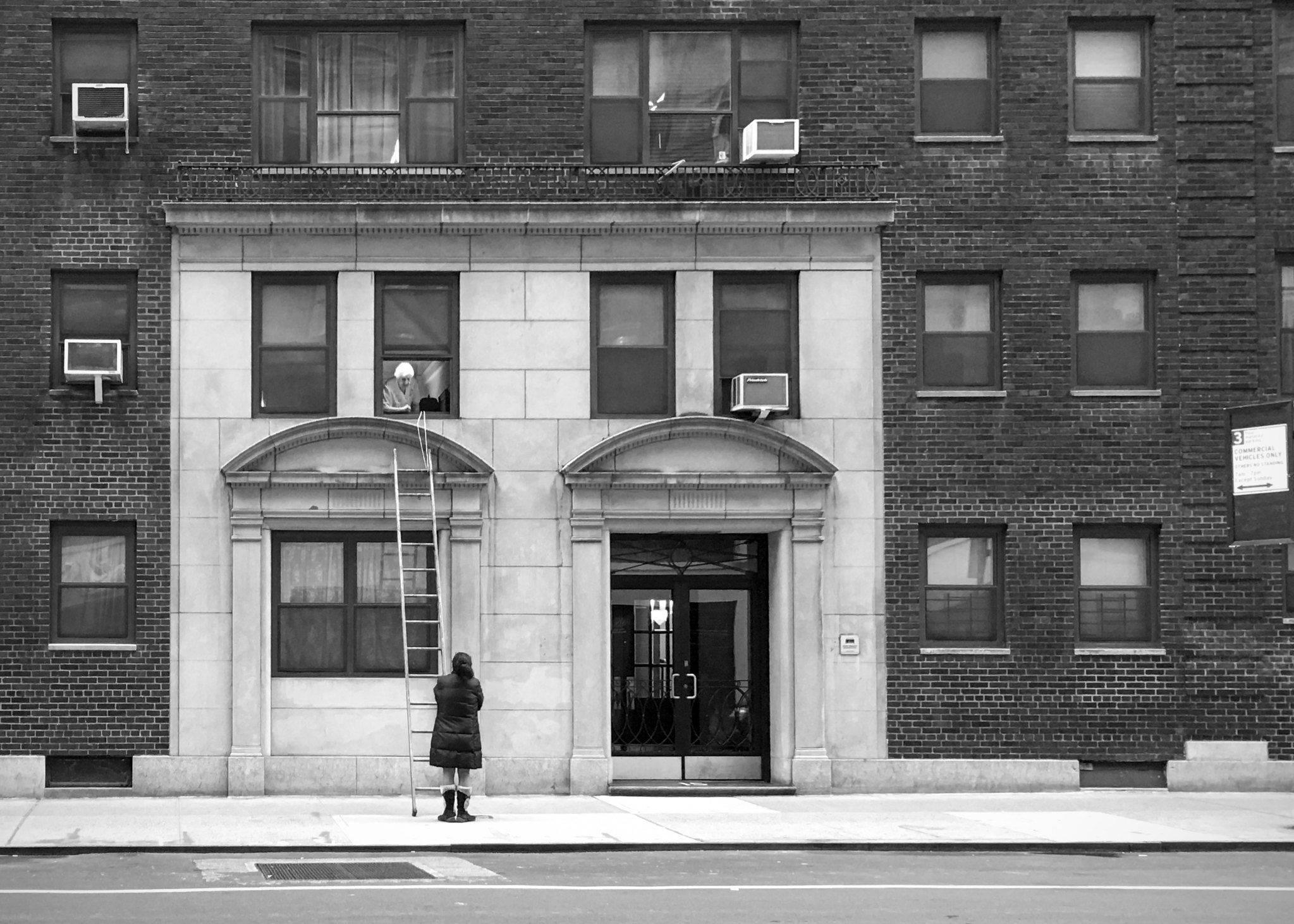 As a local news reporter, I occasionally had to knock on a stranger’s door — usually when someone in my neighborhood beat was killed, died under strange circumstances, killed someone themselves, or committed some other crime. Every time, I questioned each choice that had led me to that moment. Why was I a journalist? Was I really cut out for this profession? Surely, I thought, a good journalist wouldn’t be afraid to knock on someone’s door. And I was afraid. The act felt invasive, but beyond that, it summoned my deepest insecurities with a jarring efficiency. As I approached the door, dread pricking my throat; I questioned my toughness, my intelligence, my bravery, and my ability to connect with people. (Most of the time, it went fine — more on that later.)

I was not alone in this feeling. My friend and former DNAinfo New York colleague Danielle Tcholakian dreaded door knocking, too. “I spent a lot of time beating myself up because that shit scares the crap out of me,” she told me recently. “Not because I’m afraid somebody is going to attack me, but because I feel like it activates everything in me that doesn’t feel like I know how to be a person in the world. I have this idea there’s some perfect way to approach people in this setting, and if I could just figure it out it’d be fine.”

What makes door knocking so uniquely challenging is that there is no perfect way to approach people in these strange settings. To a certain extent, it’s impossible to prepare for, and it cannot be taught. There is little precedent for it in the lives of most people because it is a clear violation of social convention: there are few times, and indeed, few jobs, where you need to ask a stranger uncomfortable questions about a tragedy, controversy, or local scandal. I wonder if it requires an unusual tolerance for humiliation, or a penchant for masochism; that, or a godlike serenity.

But more than that, it places the reporter in an intensely vulnerable position. You knock on the door; what happens next is entirely out of your control.

Sam Raskin, a reporter for the New York Post who door knocks often in his day-to-day job, doesn’t share my or Danielle’s nerves or self-doubt about the task. He’s practical about its importance: If a person has died, it gives the deceased person’s loved ones an opportunity to have some say in how they are remembered in the public record. “I sort of see it as a very foundational part of what I do,” he said. “Sometimes I’m a little bit nervous because I don’t know how the person’s going to react.”

He showed up once at the family home of a man who had been shot to death by an angry driver in a road rage incident, only to find the police hadn’t yet notified them (police are not supposed to release the names of victims until after the family has been notified). The man’s brother answered the door and responded with confusion. “They were like ‘What happened?’ I had to go back downstairs. I basically was like sorry, it’s not my place to tell you, I’m really sorry.”

Raskin describes hearing a scream after he went downstairs. “We heard yelling from that part of the apartment complex. He had apparently found out a minute after we knocked on the door.”

Another time, he knocked on the door of a woman whose son had been assaulting riders on the subway — she was eager to speak, waiting in the hallway when he came up the stairs. “I think she suspected why I was there, and she was ready to talk,” he said.

Danielle once told me a story during my early days at DNAinfo that encapsulates the vulnerability of door knocking. A woman had fallen off a roof at a party in Greenwich Village and died, and Danielle was sent to talk to her friends and boyfriend. “I just remember the whole time I was walking there, I was telling myself not to chicken out,” she said. Once she got there, things started off well. “In so many ways, it was such a good door knocking experience, in that I showed up at the building, the super saw me standing in front and just let me in — I assume because I look like a young white woman — and [I] went up to the top floor to where the apartment was and I knocked on the door,” she said. “There’s a part of you that’s a competitive reporter who’s like, ‘I did it.’”

Then came the unpredictable human element. “I tried to introduce myself and explain what I was doing there and they were like, ‘Who the fuck are you? How the fuck did you get into our building?’” They yelled at her to leave, and she did, hastily leaving her business card in case they changed their minds. “I walked outside and I stood there and one of them came out and was like, ‘Get the fuck out of here, you need to get out of here or her boyfriend is going to come down here and beat the shit out of you.’” She couldn’t really blame them.

Years later, stories lingering on the internet about this woman’s death include gruesome details from the police report and, in some outlets, gripes from neighbors about the building’s loud parties. There is little trace of who she was as a person beyond publicly available details about what school she attended and where she had worked. This surface history is what a good reporter is trying to prevent when they knock on someone’s door after a tragedy. “You tell the person the truth of the news cycle — that you have 24 hours to control the news cycle [about] their loved one who died,” said Danielle.

Later that day, she heard from the friend who had warned her to leave. They were outraged and heartbroken over the state of the coverage, and had some regrets at not talking to Danielle. She spoke to them just as another person on her way home from the newsroom that night. “I remember feeling, on a human level, I was happy with how the day ended — I just didn’t know professionally if I’d really done a good job,” she said.

Shortly after the 2017 white supremacist rally in Charlottesville, a pair of Confederate flags hanging in the windows of an East Village apartment building began to elicit feelings of fear and anger in the neighborhood. It was unclear how long the flags had been there — some said years — but many were noticing them for the first time. I went down to the intersection of East Eighth Street and Avenue D to speak to the apartment’s neighbors, who were shaken. Cops were stationed nearby because a man had thrown rocks at the building. A resident told me he had been mistaken for the owner of the flags, so had been the target of vitriol when he emerged on the fire escape to smoke a cigarette. But the owner himself had remained curiously silent and hidden away, though lights from inside his apartment backlit the flags, creating a sinister glow.

When I explained to the neighbors that I would attempt to talk to the man, they tried to dissuade me, explaining that he was a volatile and potentially dangerous person. I didn’t have a choice, I told them. It was my job to do everything in my power to try and speak to him. So I rang his apartment buzzer repeatedly, to no avail. Once a neighbor let me into the building, and I climbed the staircase to the floor where he lived. His next-door neighbor poked his head out and repeated others’ suggestions that I not bother the man; I asked him to leave his door open while I knocked, just in case. My heart hammered in my chest. My hands shook. I expected screaming and threats.

Neither happened. The man didn’t answer. I left a voicemail with a number my editor dug up, but he didn’t answer that either. The following week, I discovered that he had been on vacation the whole time. I did eventually meet him in person, and while he offered some deeply troubling quotes about the confederacy (while, predictably, denying being a bigot), I did not feel physically threatened. (The flags had already been removed by the time of the interview.)

Another time, I knocked on the door of the Hell’s Angels clubhouse in the East Village after one of their members shot a man over a parking space. I remember there was a “Do not knock” sign on the door, but I did anyway. No one answered. At some point, I received a pretty graphic, borderline threatening email from someone who I assumed was a member, who was furious that I’d written about the shooting. But the fact remains that I’ll never know what it would have been like if I’d met them face-to-face.

I’ve realized that what I remember as the scariest door knocking experiences were the ones where no one answered the door. Other instances were often followed by some moment of grace or catharsis in dark circumstances — unhoused New Yorkers offering fond remembrances of a fellow shelter resident who had been killed; an East Village woman recalling the quiet kindness of the lonely neighbor who died in his home, whose death was only detected when the smell of decay permeated the whole building, and who was remembered as little more than a “hoarder” in some publications with a more salacious bent. I felt worse when my efforts were fruitless — when a young woman killed by a truck driver while riding her bike remained a mystery to me, her co-workers declining to speak to me with downcast eyes, a man I assume was her roommate dismissing me brusquely as he entered the building.

Like Danielle, I can’t blame them. I wouldn’t want to talk to me either. But the fact remains that this awful intrusion is necessary to ethical reporting. At the time, my worst fear was that someone would answer; I realize now that it may be worse when no one does.