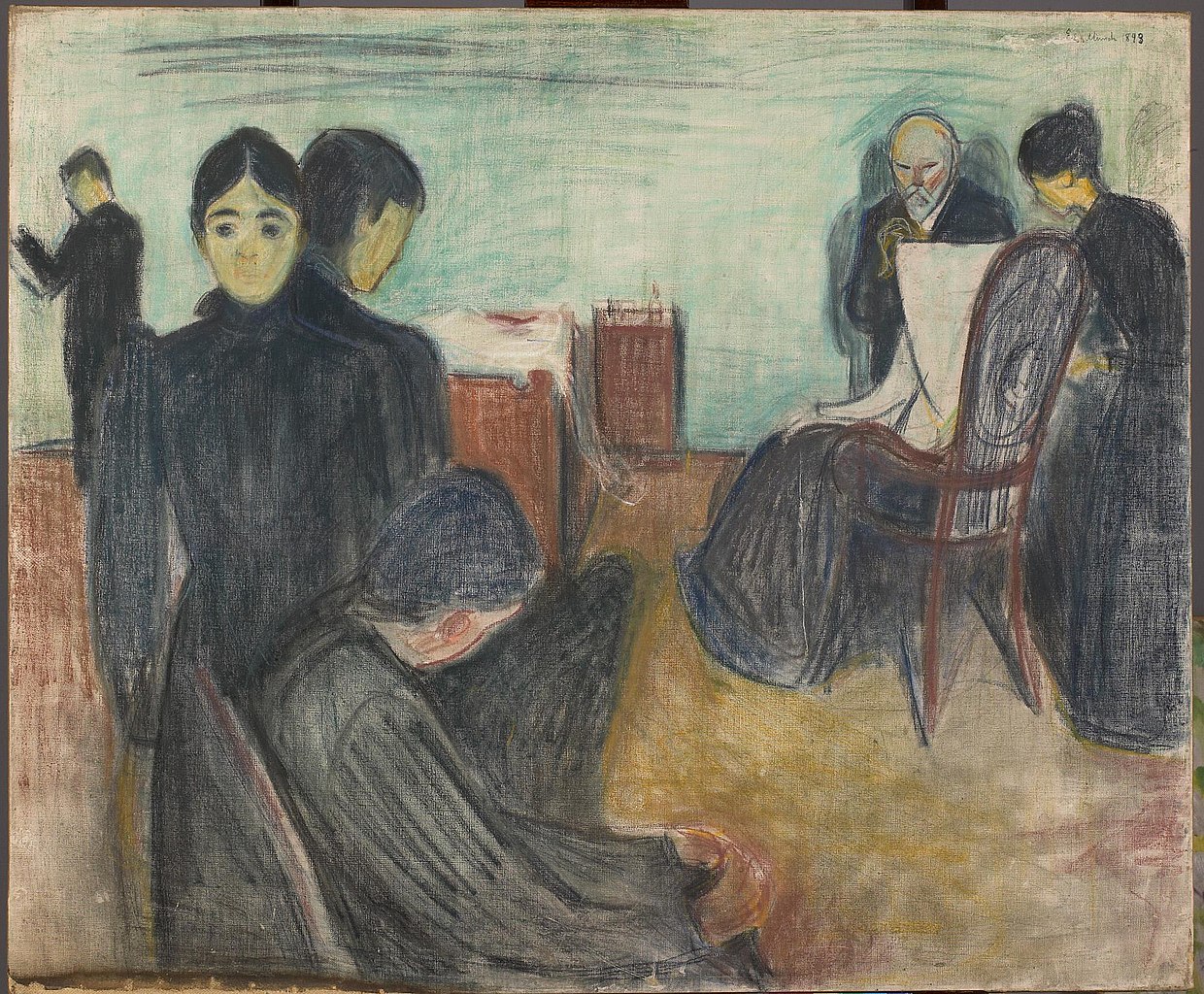 Death in the Sickroom, Edvard Munch. Image via Wikimedia Commons.

Maureen O’Donnell, obituary writer for the Chicago Sun-Times of roughly a decade, is giving me a rundown of some of her memorable work when, suddenly, I feel like my heart is being squeezed like a dishrag and there are tears in my eyes. I’m surprised by this development — I don’t believe I’ve ever cried in an interview before, and the detail that sparked it is a small domestic footnote O’Donnell included in a piece. O’Donnell had been writing the obituary of Olympic gymnast Meta Neumann-Elste and, for all her efforts, felt she hadn’t yet captured her essence. Then she called up the woman’s husband, and he told O’Donnell the detail that made me cry: that when they’d first been married, before she’d competed in the Olympics, the only furniture they had in their apartment was a bedroom set and a balance beam.

“Suddenly I felt like that was my Rosebud moment,” O’Donnell said, describing it as an epiphany. “I felt like, now I get a sense of what was important to her — that was her priority.”

I’m still not entirely sure why this detail was so moving. Maybe it was because it came from her husband — it was something about her that he remembered and wanted others to know. Maybe because it showed her yet-to-be-actualized ambition as a young person. Maybe because so many people live in sparsely furnished homes with their metaphorical balance beams and never make it to the Olympics. But mostly, I think, the specificity of this little detail made a stranger feel real to me; I could see her practicing in the living room, then eating dinner on the floor next to it. That someone who had once done those things was now gone felt almost unbearable.

This is the task of the obituary writer: to find what O’Donnell called the Rosebud moment (a phrasing she attributes to a fellow obit writer), the moment that will show who someone was. “What makes somebody tick,” says O’Donnell, “What formed them?”

Writing obituaries is a unique genre of journalism. In many ways, an obituary is a profile like any other — you attempt to express the truth about a subject by weaving a set of facts together to make a whole, comprehensive portrait. But its purpose is also eminently practical: to cement the final analysis of a person’s life into the public record.

Long before obituaries became a journalistic or literary endeavor, they served a civic role, notifying members of a community that a person had died. Early death notices are dry, sparing, succinct. A particularly brief notice from The Adams Sentinel of Gettysburg, Pennsylvania dated November 1, 1858 reads: “The Rev. Francis B. Jamison, formerly Vice President of Mt. St. Mary’s College, near Emmitsburg, died recently at St. Vincent’s College, Cape Girardeau, Missouri, in the 58th year of his age.”

The notices become more florid and sentimental during the Civil War, when mass deaths among young people began to flood the pages of local newspapers. Then, with the automation of typesetting, more space could be dedicated to printing obituaries in newspapers. These obituaries reached something approximating their final forms in the 1930s and ’40s — a short personal history, a list of surviving loved ones, and the time and location of a funeral service.

But the obituaries written by contemporary journalists are a different thing entirely. The family of departed does not choose the words printed in the newspaper; those choices are made by a person who is, first a foremost, a news reporter. There is an impetus to capture the truth of a person’s life, warts and all, and this takes precedence over eulogizing the dead.

“We’re not writing tributes, we’re writing news stories,” says O’Donnell. “There are times people want you to gloss over the fact that somebody got sent to prison or had their law license suspended for malfeasance…Maybe it’s not going to be the focus of the obituary, but that has to be included — it’s part of the public record.”

O’Donnell believes that the desire to omit certain aspects of a person’s life, while understandable, can prevent them from being remembered fully. She once found herself writing the obit of an accomplished academic who, as a child, had suffered abuse at the hands of her father. A relative of the woman asked O’Donnell to leave that detail out of the story.

“She had become one of the most renowned academics in her field — she had written books, she was a respected teacher, she had mentored scores and scores of other people in her field,” says O’Donnell. “And I said to this relative…If I include the fact this little girl used to stand up to her father, then went on to this extremely accomplished academic career, I think it shows how brave that little girl was and how unusual she was…it makes her adult achievements all the more remarkable.” The relative ended up agreeing that the detail should be included.

The obituary is unusual in this way — there are dueling incentives at play in every news story, but in the business of obits, the writer must balance requests from bereaved loved ones who often have opinions about what should be included or emphasized. “All of us have produced something that hasn’t pleased somebody,” says Penelope Green, a feature writer for the New York Times who focuses on obituaries. “I’ve never upset a family member. There are people whose fame is maybe not so savory, and that can be complicated.” She also mentions that factual errors, dreaded by any reporter, are especially worrisome for obituary-writers. “There’s the fear of corrections, which is already very intense at our newspaper,” she says. “You just want to get it right.”

It’s a heavy responsibility, but one the committed obituary writer bears gladly. I am struck, in talking to both O’Donnell and Green, by how much they seem to cherish their roles, viewing them as a vital public service. “Obits are invigorating,” says Green. “They’re about life. It’s not a depressing task; it’s a life-affirming task.”

O’Donnell is part of a group called The Society of Professional Obituary Writers, whose members gather to talk about the craft and the ins and outs of the job. (They also hold an annual conference called ObitCon, where trophies called Grimmys are awarded for excellence in the craft.) That community has become especially important during COVID, when the demand for obituaries has overwhelmed many writers.

“We ask each other, what are you experiencing?” says O’Donnell. “And [Washington Post obit writer] Harrison Smith was the person who said, ‘We’ve been doing triage.’ There are so many requests for obituaries coming in… [that] we have to figure out who is the best person to write about today.” O’Donnell’s response has been to try and write about “a cross-section of people, all different lives, all different age categories.”

COVID obituaries are also unique in that they are inevitably connected to the larger, global news story of the pandemic, though both O’Donnell and Green say they try to focus on the person’s life more than the manner of their death. Sometimes, it’s unavoidable. Green recalls her colleague writing an obituary for a doctor in a small town overrun by anti-mask sentiment. His story, for better or worse, reflects the factions in a national disaster.

The “acute responsibility” of obit writing, says Green, is keener with obituaries of COVID-19 deaths because so many subjects are not public figures, but private people who happened to have died in a newsworthy way. “You really, really want to get the sense of them,” Green says. “Oftentimes you’re dealing with people who are shattered by their loss…Often you’re speaking to people who are just sobbing.”

Shannon Najmabadi, a women’s health reporter at the Texas Tribune, has taken to writing pieces she describes as “a combo of obit and feature” during the pandemic. Recently, she wrote about three South Texas widows who have banded together for comfort. Covering the pandemic has involved a learning curve, she says; her approach to these stories differs from her usual process. “There’s a lot more hand-holding involved,” she says. “I try to be more sensitive when interviewing, not to push [loved ones] to talk about things that are too hard for them, or at least let them get there on their own terms.” She also takes the time to tell her interviewees what to expect from the story. The stakes of fact-checking, already an important pre-publication step, feel higher.

She tends to walk the person she is interviewing through a chronological account of the deceased’s life — that makes it easier, she says, by taking the focus off of the death. Ultimately, she is looking for the Rosebud moment, same as O’Donnell, but COVID obituaries serve another purpose as microcosms of a national story. “We want to put a human face on some of these numbers,” says Najmabadi. “There is always this backdrop of, this is happening during COVID. We’re not just writing about this one person — we’re writing about them in the context of this moment.”

A reference to Citizen Kane, which is framed by a reporter’s quest to understand Charles Foster Kane’s last word — “Rosebud” — that leads him to better comprehend Kane’s life.