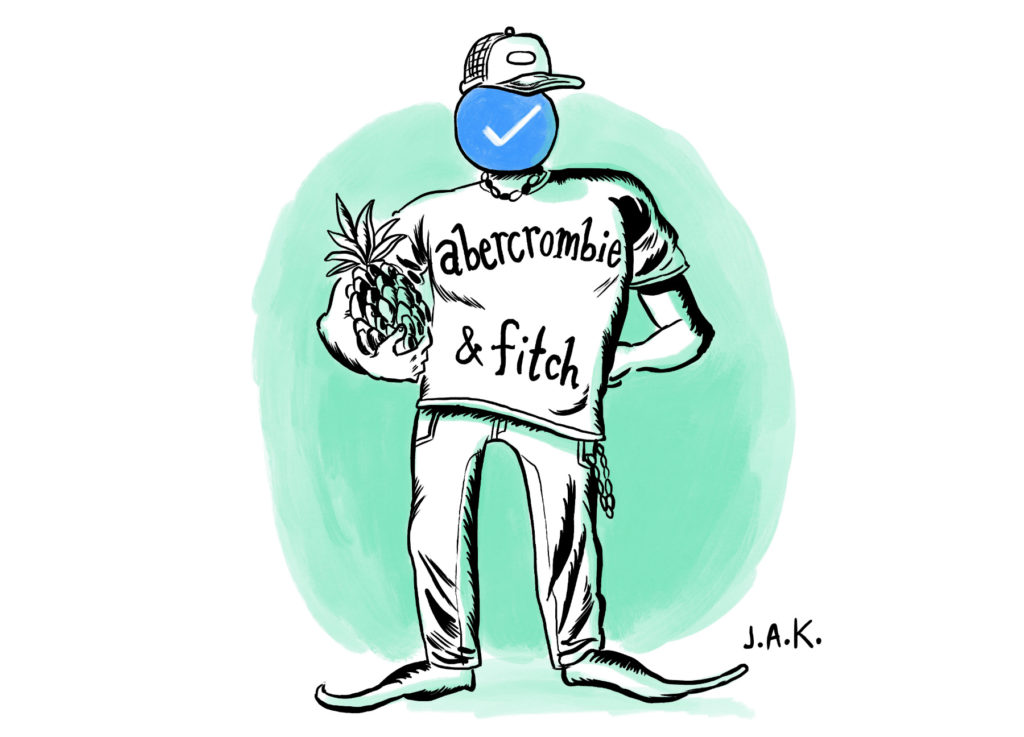 For as long as we have Lived in a Society, humanity has been condemned to recognize and covet the status symbols of our peers. In the 17th and 18th centuries, pineapples were so synonymous with wealth and royalty that even a rotting one was a prized possession to be displayed prominently. Medieval Europeans wore long, pointy shoes as signs of fanciness — a trend that grew to such ridiculous lengths, the court of King Edward IV ultimately banned any surpassing two inches. Today, we have the Twitter blue check, the little badge that goes next to a person’s name when they’ve been verified by the platform’s powers that be as an “account of public interest.”

As predictable as the setting sun, these symbols turn from badges of relevance to indicators of outdated tastes and a cloying desire to belong. For example, as a middle schooler in the early aughts I bought an overpriced Abercrombie & Fitch t-shirt at the mall, thrilling at the aura of popularity knit into that too-thin cotton. My Evangelical parents forbade me from wearing it out of the house. Years later, at a sleepover, I put it on only to have a friend scoff, “Really? Abercrombie & Fitch?” I finally realized that there was nothing more uncool than wanting to be cool — the equivalent of a Londoner still wearing five-inch pointy shoes after 1463.

What I’m saying is, we truly never leave middle school, and the blue check has become the Abercrombie & Fitch shirt of media Twitter. I’m kind of glad now to not have one, though at one point I considered it. When I started work as a reporter at DNAinfo in 2016, I was asked, along with my colleagues, if I would like to become “verified.” I declined, feeling that, as a fledgling local reporter covering community board meetings, having the symbol would make me look like a try-hard to my peers. Today, actual people of public interest still choose to forego the symbol for similar reasons: Jia Tolentino, an effortlessly cool writer, said this year that she goes out of her way to un-verify herself whenever Twitter imposes a blue check on her profile because it makes her “feel like a narc.”

The fear of narcdom is a reasonable one. Brands and authorities have learned to lavish attention on blue checks, a recipe for disaster if you have trouble keeping your tattletale tendencies in check. Olympic weightlifter Mattie Rogers recently tweeted at United Airlines when she felt her flight wasn’t being upgraded quickly enough; when someone marveled at how quickly she received a response, she admitted, “Blue check gets you far with customer service on here.” The famous author Roxane Gay’s propensity to complain about companies on Twitter is so well-known as to be a running joke on the platform.

Beyond the stigma of public Yelp reviewing, the Twitter checks have recently been linked with entitlement by conservatives on the platform (many of whom are themselves verified). Blue checks, they say, are trust-fund babies who believe they deserve special treatment, pathologically online and addicted to conflict, prone to “fighting with bots about nothing.” Conservative writer Stephen Miller accused blue checks of, essentially, being moralistic scolds who go after “every day forklift operators.” The conservative pundits imply that one can have a blue check without being a blue check; blue check-ness is a matter of a haughty, coddled attitude more than actual possession of the symbol. How did the blue check, once a symbol of clout, become so universally maligned?

It wasn’t always like this. In the old days, before Twitter was a “hell site,” the blue check was venerated and coveted. It was first introduced in the summer of 2009, after the platform was sued by St. Louis Cardinals manager Tony La Russa over a fake account impersonating him — a gripe shared by other celebrities, including Kanye West. Initially, “verified accounts” simply meant that you were who you said you were.

To answer @chrisbookfn’s question, since 2009, Twitter has required users seeking verification to fill out a form to demonstrate their account is indeed of public interest. Such accounts, according to Twitter, typically belong to “users in music, acting, fashion, government, politics, religion, journalism, media, sports, business, and other key interest areas.” The actual verification process is bare-bones: Supply a phone number and email address to prove your identity; include a bio that “accurately reflect[s] the nature of your public persona”; and make sure your profile includes a profile photo, a header, and a link to your website.

By 2010, Tweets about blue checks were markedly more defensive. “Blue checks are earned, not given out like chocolate on Halloween,” scoffed @michael_schlact, who apparently earned a blue check through being, per his Twitter bio, a “Jesus Follower. Husband. Dad.”

At this point, moderately famous people had begun begging Twitter for the checks. “YO CAN I GET ONE OF THOSE BLUE CHECKS NEXT TO MY SHIT?” said The Kid Mero, now one-half of popular late night show Desus & Mero, but at the time a relative unknown (the tweet got zero likes). “Dear @verified, your blue checks are beautiful and would really bring out my eyes (wink wink),” cringe-posted UFC fighter Kurt Pellegrino. Both Mero and Pellegrino have checks, but not everyone had the requisite clout. Twitter’s search engine is a graveyard of of still-unknown users with a few hundred followers who in 2010 dreamed about one day proudly displaying the check next to their names.

By 2011, the blue check was a straightforward status symbol. That year, rapper Danny Brown tweeted: “Don’t judge by how many followers someone got … Judge how many blue checks in them followers.” In 2013, comedian Hari Kondabolu campaigned successfully and mostly unironically to get himself verified.

But in 2014, the attitude shifted. In a subtweet that year whose context is now forever lost to time, Gabriela Barkho, a (now verified) tech reporter for the Observer, bemoaned “blue checks crawl[ing] outta the woodwork and into my mentions.” The implication is clearly negative: checks were randos. That same year, model Brittany Renner complained about the proliferation of unearned blue checks, which were supposed to be reserved for real celebrities and were instead, she noted, flaunted by wannabe influencers. Their currency was devalued. In 2015, Jonathan Chait let slip that Twitter has a special “verified only” setting, prompting The Appeal’s Adam H. Johnson to joke: “When Twitter is nationalized, there will be no blue checks. ☭”

It is no longer cool to beg for a blue check nor to brag about having one, regardless of one’s political affiliation. The symbol’s original use as a badge of expertise has made blue checks as a group the target of any wannabe populists, who attack the straw man of Blue Ivory Tower dwellers. The first use of “blue check” as conservative shorthand for “liberal media elite” appeared, unsurprisingly, around the 2016 election, when conservative commentator Tammy Bruce accused “blue checks” of downplaying Trump’s performance in the second presidential debate. Now Tucker Carlson uses the term on television.

Conservatives on the internet imagine themselves dogged by a bogeyman of monolithic liberal power, constantly being censored and overwhelmed by a higher power that does not exist. They want to think they are being silenced, that Twitter refuses to adequately recognize their authority and popularity. But their complaints of being “shadowbanned” have been shown to be false; in fact, Jack has been unwilling to kick Nazis off Twitter and meaningfully revise the platform’s harassment policy. Twitter doesn’t do the left any favors. It’s just a shitshow for everyone, with systemic problems the blue-check hierarchy did nothing to ameliorate.

Around 2016, left-leaning media shitposters also defected from the checkmark system, an attitude summed up by Rachel Sennott’s recent tweet, “I was verified against my will.” It continued its slide into meaninglessness. Grifters now get verified just because they are good at being online. Consider Eugene Gu, the doctor whose viral posts shielded a history of abuse, and Jacob Wohl, the right-wing conspiracy-monger who was banned for running fake accounts. Verified users even do trolly impersonations of real people, like Alex Arbuckle, whose 2018 Italian Elon Musk bit briefly got his check removed. (“ayyyy whoopsy daisy,” he tweeted in-character.)

The blue check is bestowed for no particular reason and taken away for the same. The check won’t be revoked if you lie (Trump still has one) but it might be if you joke. You certainly don’t get one for demonstrating competence in your field. Blue checks are the false promise that social media is anything other than anarchy, a state of nature in which attention subs in for accuracy as a measure of truth or strength, where we are all ultimately left to fend for ourselves.

The only sensical response to the check, then, is to reject its false promise altogether. Or you can wear it like a Juicy Couture tracksuit: a thing that was once cool, then uncool, and finally only cool if you understand its uncoolness.

CORRECTION: A previous version of this article referred to Olympic weightlifter Mattie Rogers by her Twitter display name, “Martha May Whovier.” Martha May Whovier is Christine Baranski’s character in How the Grinch Stole Christmas (2000). Study Hall regrets this error.